LOVING CUP: “Old Friends: A Self Portrait” is Lonny Hall’s oil painting that survived a five-month stay in a studio turned into a construction area following Super Storm Sandy. (Photos by Victoria Ford)

EEL DEAL: “Atlantic Puffin” by Suzi Hoffman is a friendly face in the series.

When the new Beach Haven Borough Hall opened in 2018, its walls, while cool and charming, were “an intense gray” and “very institutional,” according to the co-curators of the Bright and Colorful Exhibition of 63 works of art that now adorns them. Artists from the Pine Shores Art Association in Manahawkin display their work in seasonal shows – new to date – to provide visual and mental stimulation to all who pass through city halls.

Former Mayor Nancy Taggart Davis initially approached the arts association about suspended art. Lonny Hall and Suzi Hoffman are co-curators, with assistance from Paul Hartelius, Carlo and Maryann Gaboardi, and Willy Mueller. Hall has been a Beach Haven resident for 30 years and Vice Chairman of the Board of Directors of the PSAA. Both women have been members of Pine Shores for over 10 years.

Their first exhibition at Beach Haven had around 95 paintings, they said. The reception was positive and the mutual benefit of the arrangement was clear, so the city said to continue. Soon, the borough had a professional hanging system installed. The following shows have had themes such as history, photography, beaches and boats, LBI, winter celebrations, the height of Beach Haven youth culture, summer and now “Color!” 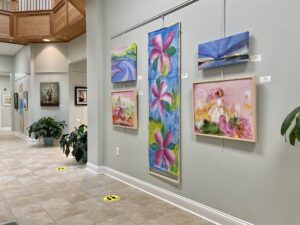 PUBLIC DISPLAY: Framed works of varying sizes, as well as large silk paintings, line the hallways on the first floor of the municipal building.

By deciding to “Color! For the current show, Hall said they thought the world could use a good, bold touch.

“With color there really is no limit,” she said.

“Color!” open September 14. The exhibit is jury-free, which means all members of the association are welcome to contribute original artwork that matches the theme and is ready to hang, Hoffman explained. With over 200 members and over 35 artists represented in the current exhibition, the effect of walking in and through the first floor of the Borough building is to be washed away by layers of vivid hues and images cheerful: many sunrise and sunset skies, many flowers, birds and other wildlife, lighthouses and other coastal scenes.

Hoffman’s acrylic painting of arctic terns during their spring migration is prominently seen forward. His mischievous and hungry puffin is watching from another prominent place. 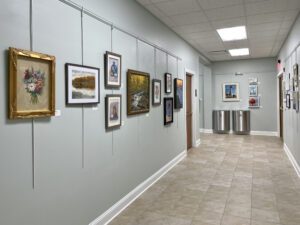 LONG VIEW: The Pine Shores Art Association rotates in a new exhibition in space every four months or so.

In a corner near the sunlit ceiling dome is Hall’s oil painting “Old Friends: A Self Portrait”. The subject is his real box of brushes, having literally painted himself. The character of worn, well-used, paint-splattered tools – and the artist’s love for them – leaps off the canvas.

The story back: She was working there in the summer of 2012, before Storm Sandy hit and put her out for five months. The painting remained in her studio the entire time and, much to Hall’s relief, was no more worn when she picked it up, despite close encounters with contractors.

That’s what’s great about working with oil, she says. It takes forever to dry, and “you can’t kill it.”

Opposite Hall’s brushes is a pair of alcohol ink paintings by Mary Walker-Baptiste called “Tournesol I” and “Tournesol II” (sunflower in French). The floral set is an inadvertent advertisement for Walker-Baptist’s alcoholic inks class she teaches at Pine Shores. 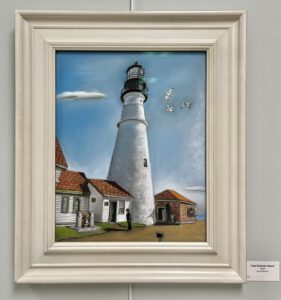 Around the corner, a range of fall colors await. Lose yourself in the watercolor “Koi Grouping” by Jim Maloney and gaze at “Lucent Lights” by Carol Freas, a collection of seven colorful globes containing the lighthouses of New Jersey.

In figuring out how and where to hang the dozens of paintings, Hall and Hoffman set out to bring together works of art that complement each other.

Typically, these AAPS exhibits range from 60 to 90 pieces, depending on the size of the individual paintings. Larger shows can be hung in a more living room style, but hanging them more sparsely, Hall noted, is a “very clean” look.

Winter themes tend to be more personal for locals, Hoffman said. So when they come to pay their taxes or whatever, they can go through the show and consider buying some art for their house. 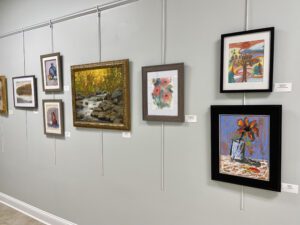 For the story, Kris and Marge Anderson (family of the original owners of Crest Fishery, the island’s very first business) generously provided photographs and artifacts. This show was such a success that it led the town hall to devote a space to historical exhibitions. Just before the pandemic, the display cases in the main entrance were for items on loan from the New Jersey Maritime Museum and the LBI Historical Association, both located in Beach Haven.

The goal of making room for art and history is to create a sense of intrigue, to encourage passers-by to step out of the sidewalk and gain a better understanding of the past, people and passions that define the city. queen city and make the district and its surroundings so special.

Next 'Beach' coworking spaces the new craze in Sao Paulo